How Williams-Sonoma Tried to Fill 4,000 Positions in a Single Day

Williams-Sonoma began life when Charles E. Williams settled in the Sonoma region of California, and opened his first hardware store in 1947. Several years later, in 1953, when on a trip to France, Williams developed a fondness for French kitchenware, such as their distinctive copper pans and skillets. Upon returning home, he decided to begin selling the French kitchenware to his American customers. He rebranded his hardware store as a seller of professional and restaurant kitchenware to the public, and named it Williams-Sonoma.

Today Williams-Sonoma is one of the biggest retailers in America. With revenues of $5,084 million, the company narrowly misses out on a place in the Fortune 500, sitting at #506 on the famous list of publicly traded companies.

Williams-Sonoma employs 19,400 staff across more than 600 locations. As such a massive employer of people, the company needs to always be thinking of new ways to fill gaps in its workforce. 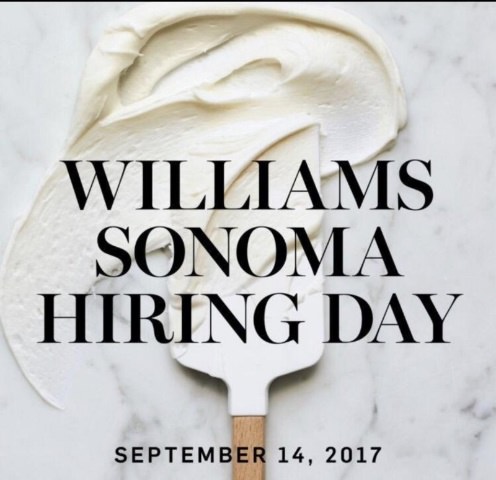 People interested in joining the Williams-Sonoma family were invited to print out their resumes, travel to their nearest participating store and learn more about the range of career opportunities available with the company. Positions available for application during National Hiring Day included part-time, full-time, and seasonal work in hundreds of Williams-Sonoma branded stores.

Jobseekers interested in employment in Williams-Sonoma's corporate and supply chain offices were invited to submit applications via the company's online careers portal, with a bespoke hashtag - #WSINationalHiringDay - to indicate participation in the National Hiring Day.

Rather than keeping recruitment as a cold and detached affair, Williams-Sonoma wants to foster a sense of community and togetherness right from the word go:

"Culture is a top priority for us at Williams-Sonoma, Inc. We want to be an employer of choice and have a positive presence in the communities where we work," said Laura Alber, Chief Executive Officer and President. "We are proud that more than 50% of senior leadership across our enterprise is female. We welcome all, and stand for equality for our employees and for our customers."

Not only is Williams-Sonoma holding its National Hiring Day to fill those much-needed spaces in its workforce, but it's also offering unique customer service opportunities to jobseekers who need to stay a little closer to home.

There are a lot of companies out there who offer work from home opportunities, but they can often turn out to be less than stellar career choices. They usually involve performing some mundane task such as stuffing envelopes or filling out surveys, and a person often needs to work an obscene number of hours to generate anything close to the advertised levels of income.

However, if a person has high speed internet access, a personal computer, and a phone line, they can join the customer service team at Williams-Sonoma - without ever setting foot in a call centre. Successful applicants can expect to work between 30-50 hours per week, earn $11.50 per hour, and enjoy the same product discounts as their more traditionally employed colleagues. 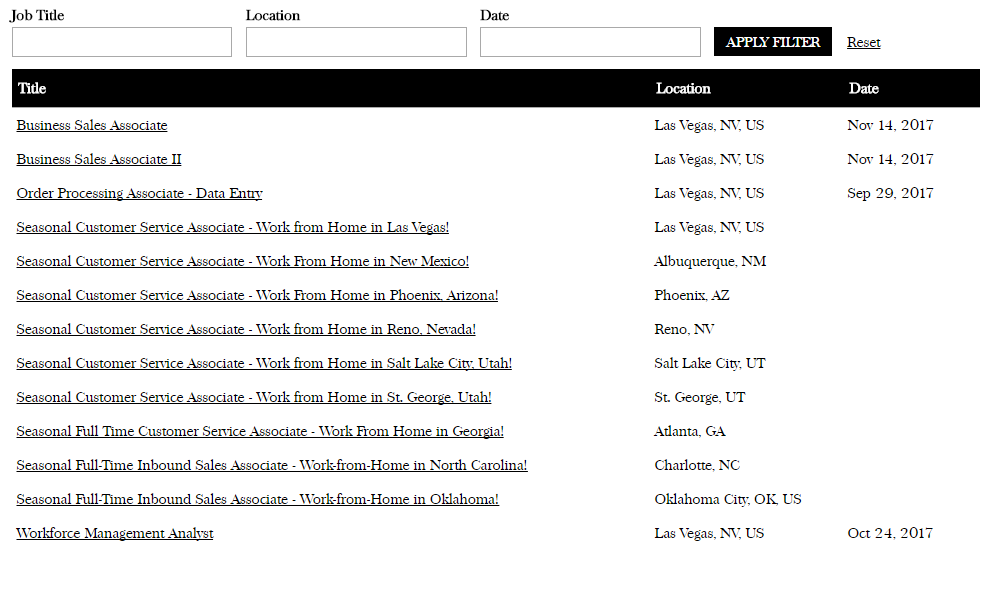 With so many work from home opportunities proving to be grossly exaggerated and rather exploitative, Williams-Sonoma is looking to empower those people who have commitments or conditions which keep them at home to earn a decent wage for reasonable work expectations and conditions.

"We offer the opportunity to work from the comfort of your own home!!" says the job listing on the Williams-Sonoma careers portal. "Save money on gas, eliminate your daily commute and have more time to spend with family during non-work times.

Recruiting for the Future

Both the National Hiring Day and the work from home opportunities have been incredibly popular with jobseekers, and thousands of positions have been filled. By thinking outside the box with its recruitment process, Williams-Sonoma have all the people they need for another busy holiday season.

"We are invested in the areas we serve and believe in the power of connecting people within our local communities. We are committed to finding smart, imaginative people to build teams from all backgrounds and skillsets and are eager to create new opportunities, and welcome new faces to the Williams-Sonoma, Inc. family."

Download the agenda today for more information and insights.